Controversial law in Russia: protection of the family or a historical victory of the russian patriarchy?

The Russian Duma (lower house of the Russian Federation Assembly) threatens to “trivialize” domestic violence. Hannah Arendt’s expression “banality of evil” can be brought back from the dusty drawer, in view of the fact that patriarchal violence is viewed as “unspectacular”.

The law which caused political debates and protests in Russia, theatens so look at domestic violence as a small violation of the ordinance, instead as a crimical act. If someone (most likely a men!) beat up his family, one can get easily away from it: With a penalty not bigger than 85 – 470€ one can avoid further punitive measures (Anastasia Arinushkina).

The results: The economic crises in Russia has an impact of the family budget and so a “tax” for domestic violence will hurt the victim even more than the punisher. Poor families could not afford such penalties and logicaly there will be less complainments. Who will go to the police if there will be justice, but no bread in the house? The patrairchy seems to became grotesque in Russia.

Unfortunately, the structural violence, nor the domestic violence in Russia, has a high place in the political debates. While numerous demonstrators have appeared in the Sokolniki Park to protest the new legislation, “the media and public discussion space will cast a shadow over the subject”. Russian society is still patriarchal, as a Russian proverb makes clear: “If he hits you, he means he loves you.” (APA / AFP, 13.2.2017).


Even the “Pro-Putin” media platfrom RT (Russia Today) reports in critical tones about this legislative proposal: The RT article emphasizes the fact that the statistics clearly show that women are most affected by domestic violence. The perpetrators are 80% men! This does not seem to be a concern for the Russian majority: according to a survey poll, 59 per cent of Russians say that “these small conflicts, which have no consequences for the health of the victim, shall not be hard-regulated.” The statistics speak a clear language and need not be further comment:

“Human rights activists have estimated that 50,800 women and 11,800 minors were victims of family violence in 2015. Only five per cent of victims are men, with more than 40 per cent of violence occurring in families.” – Ulrich Heyden.

This article was published by the Varna Peace Research Institute (VIPR) in the name of feminism and the campaign against sexism and against the patriarchal power system – 20.03.2017. 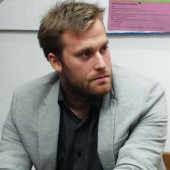 Studied philosophy and political science in Vienna.Writes geopolitical articles in his blog and for the institute. The State as an instrument of rule